You can use these two methods separately or together.

In Klocwork Static Code Analysis, the following owners are available for assignment:

Users must have the Change Issue Status permission to assign ownership in Static Code Analysis.

Syntax of the source ownership file

Each string has the format:

To specify multiple paths for the same owner, simply use multiple lines in the ownership file.

Empty fields are allowed as a way to delete ownership information.

Applying the source ownership file to the analysis

To apply your new configuration file to the integration build analysis, import it into a project or the projects_root.

The file will take effect when the next integration build analysis is run.

Once the Klocwork analysis is complete: 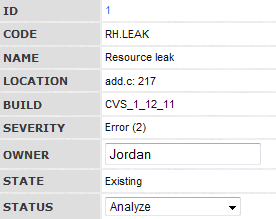 Note: Deleting file ownership information means that new detected issues will not have a default owner. The ownership of existing issues is not affected.